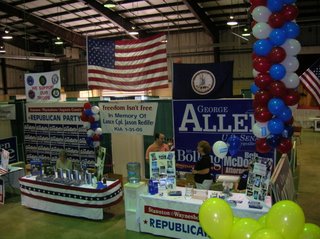 The 3rd day of the Augusta County Fair started off well with the Augusta County Republican booths ready for operation and looking forward to interacting with the people visiting the fair. This years booth consisted of several "themed" booths coordinated to promote Republican values and provide information and sources to the fair visitors...

The first booth supported the George Allen and Bob Goodlatte campaigns.
One booth represented the Staunton-Waynesboro-Augusta-County Republican Party.
Another booth supported the "From Our Hearts" www.fromrhearts.blogspot.com support the troops program.
There was a booth supporting the Marriage Amendment for marriage being between one Man and one Woman.
And another booth sold copies of the book written by Rhonda Winfield who lost her son, Marine Lance Cpl. Jason Redifer, who was killed in action in Iraq serving his country and his principles. 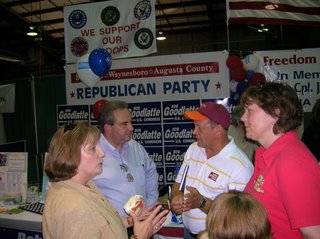 Lt. Governor Bill Bolling and his wife Jean Ann also stopped by to visit the Republican Booths and talk to a gathering of the Augusta County Chamber of Commerce members. The Lt. Governor dedicates one week out of each month to spend time traveling the State of Virginia and meeting with the people of the Commonwealth... 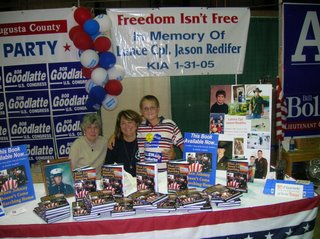 The Republican Booths were enjoyed and visited by many of the fairgoers in attendance and were busy pretty much all of the time. The booths are staffed by numerous volunteers who enjoy working all aspects the "Republican Complex" and they did a great job at promoting the Republican values that they believe in.

The table selling Rhonda Winfields book "When Johnny Doesn't Come Marching Home" commanded much interest to the fairgoers and pretty much always was busy with people talking with the author, Rhonda Winfield.

During the afternoon a member of the Augusta County Democrat Party approached Rhonda Winfield with numerous pieces of literature and stickers promoting the Democrat Candidate Jim Webb. He stated that this is the man to vote for in this next election for Senator of Virginia. Rhonda replied that she was supporting Senator George Allen because he has strong Republican values and was admired by her son Jason who volunteered to defend his country and to preserve these same values. She then showed the member of the Augusta Democrat Party a copy of her book that she wrote describing these values.

The Democrat representative then stated "Jim Webb is more of a man then this man [Jason Redifer] ever was" and placed a copy of the Webb literature on top of the book she was holding. I was standing next to Rhonda during this entire conversation and have confirmed this quote with her and know that there was a third person at the table who heard this exchange.... The Democrat Representative was then asked to leave the table at which time he moved away from the table.

I found this statement by the Representative of the Augusta County Democrat Party way over the line and unacceptable. Unfortunately it is the type of statement that does not surprise me coming from this party. This local party as well as the Democrat national party has no true platform that they believe in and in fact now have determined that Joe Lieberman is not even "Liberal" enough for them so they voted him out.

To make an attack on the Mother of a proud American Marine who died serving his country and the citizens of that country in this manner is not acceptable by any means.

I wish I could say I was shocked. Sadly, I'm not.

This is incident is just sickening.

I pray Mrs. Windfield knows how we truly treasure the memory of her son's life and unselfish service to his country.

May I just add:
That representative of the Augusta County Democrat Party is a pig.

Anonymous said...
This comment has been removed by a blog administrator.
8:43 PM

This is not a Republican or Democrat issue and I am not going to stand by and let it be trivialized down to that level.

This is about a woman whose son died fighting for this country and was abused by an anti-war protester. During the 1960s when our guys came back from Vietnam the protesters spit all over them ... this burns me up and I never want to see that again.

I agree with SWACGirl. This is not about party politics, but about the extreme anti-war left. The anti-war left has gone way over the line of civility. This reminds me of those recent anti-war protesters outside of Walter Reed Army Medical Center. Now the anti-war left is attacking Ronda Winfield and the memory of her son. Do these people have any respect for the men and women who protect our freedoms? If I was Jim Webb, I would be embarrassed to associate myself with these anti-war zealots.

I agree with SWACGirl. This is not about party politics, but about the extreme anti-war left. The anti-war left has gone way over the line of civility. This reminds me of those recent anti-war protesters outside of Walter Reed Army Medical Center. Now the anti-war left is attacking Ronda Winfield and the memory of her son. Do these people have any respect for the men and women who protect our freedoms? If I was Jim Webb, I would be embarrassed to associate myself with these anti-war zealots.

Some things never cease to amaze me. But just a fortelling of what is to come should these nut-job dems get into office.

Bubba - wondered where you were! Welcome back!

Just when all seems right with the world ... something like this happens.

I don't care if you are Republican or Democrat or Independent or whatever ... the bottom line is we are all Americans. The terrorists who want to destroy us don't care about our political affiliations ... they hate us because we're Americans. That bottom line should unite us but, sadly as has been demonstrated by this incident, it does not. I fear we shall have to encounter another 9/11 incident to wake us up once again ... and more innocent lives will be lost. 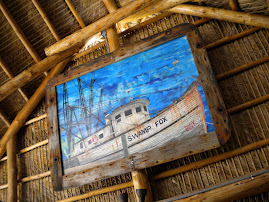